Hugo Talks Lockdown has just spotted something interesting - and, frankly infuriating - about the highly duplicitous and murderous 'UK' Government. Add it to a very long list! Not only has the odious Dominic Raab come out to say that the extremely unhealthy practise of wearing face masks will continue after June 21st, but Hugo has found, on the government's own website, that they are spending £320,000,000 on a continuing fear/misinformation campaign until April 2022.

This is not stopping - and will not stop - until the people demand it in sufficient numbers - or the likes of Reiner Fuellmich get a fair hearing in court.

It doesn't need to make sense, there does not even have to be a faint veneer of logic about it as long as the majority remain ignorant, afraid and compliant. 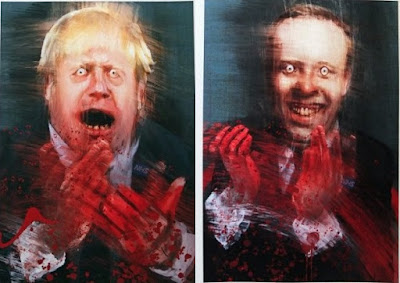 Boris Johnson and Matt Hancock exalt at the continued culling of humanity. If this seems melodramatic, then look at the involuntary DNR orders, the shunting of the elderly from hospitals to care homes last year, the continued enforcement of  highly unhealthy and totally non-efficacious mask wearing, the circulation of an untested gene therapy posing as a vaccine, the mangling of statistics to continue the Big Scare, the spiralling waiting lists for NHS treatments - such as cancer diagnosis, and the government's total lack of any concern for the highly dangerous effects of lockdowns on the nation's health. Need I go on?

REINER FUELLMICH GIVES AN UPDATE ON WHAT'S HAPPENING WITH THE NUREMBERG 2.0 TRIAL

January 07, 2022
The Parliamentary hearing in Poland is wrapping up and the criminal trial for Crimes Against Humanity is set to begin in just a couple of weeks. Dr Fuellmich outlines how the Covid Crime Against Humanity is a deliberate and premeditated mass-murder of unprecedented proportions.
Read more

July 16, 2021
Reiner Fuellmich with David Martin, July 9, 2021.   The video clip above is one interview from the 60th session of the Corona Investigative Committee, livestreamed on July 9, 2021, which can be found at Corona Ausschuss – Ausweichkanal channel.  In this interview, Dr David Martin shares a summary of his decades of research related to this global takeover via “scientific and message control”, following a trail left via US patents.  His company M-CAM has reviewed the over 4,000 patents that have been issued around SARS coronavirus, including a comprehensive review of the financing.  Contributing to the conversation are Dr. Wolfgang Wodarg, attorney Viviane Fischer and Prof. Martin Schwab (legal advisor to the Corona Investigative Committee).
Read more